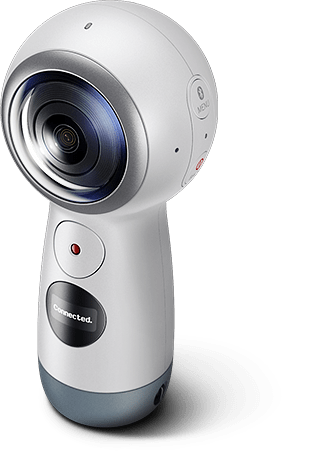 The Gear 360 is one of my main tools. It allows me to take 360 pictures and videos, capturing everything going on around me. My mom and dad recently went to Europe with a 360 camera and loved that they could with one snap capture both them and what they were looking at. Forget selfies, 360 is here!

As for me, for years, I’ve been trying to figure out how to host a show and shoot video at the same time. I’ve rigged GoPros to DSLR cameras pointing at me, so I can film someone else and myself at the same time, but the rig is very intrusive to the experience.

With the Gear 360, I can just plop it down and let it capture everything that’s happening. Meanwhile, I’m free to interact with the person I’m interviewing – or to do some stupid stunt – as I normally would.

I recently borrowed the $60k Nokia OZO, and did a comparison with the Gear 360. While the OZO does stereoscopic and produces a 8K plate, the Gear 360 wasn’t that much worse. And for my guerrilla run-and-gun style, it’s perfect. I even made a mount for the bottom of my Mavic Pro, so I can do some pretty epic airborne 360 shots, or do indoor 360 dolly shots. And it all fits in a bag small enough to count as my on-flight personal item!